You will be known as a “legend” by your own kids when you make this toy helicopter.  It won’t be a nuisance and taking up a lot of space as you can disassemble into several parts when it’s not being used.

If you use recycled materials the cost of this project will be minimal. Materials include two sheets of 1/2in plywood and 8 ft. length of 2 x 4, some 1/2 in lumber,  l/2 in. hardboard or plastic, a scrap of 3/4 in plywood, and a considerable number of pieces of hardware.

Check over to Materials List to see if you might have some or all of the required materials on hand.

Read the complete article before starting the project, as there are quite a few individual pieces and parts that have to be cut and shaped.

Start by making the cutting layout on the plywood, allowing 1/8 in. between the parts for the saw kerf. To layout, the round cabin sides, into a “beam compass” by drilling a hole in one end of a strip of wood at least 20 in. long to hold a pencil. Drive a finishing nail through the center of the strip exactly 18 in. from the pencil point. Use the nail as a pivot to draw the circular cabin sides. After all plywood parts are cut, sand all edges. Do not cut the smaller circular openings in the cabin sides at this time. 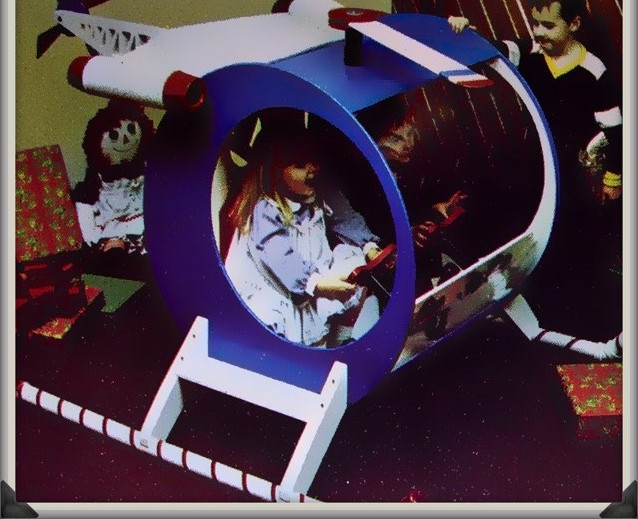 As shown in the drawing, make several vertical and horizontal lines on the cabin sides to locate the various parts that are attached to it. Some lines will have to be transposed to the opposite surfaces as indicated. Route the 1/8 x 1/4 in. deep windshield grooves on the inner surfaces of each cabin side. Note that the grooves run from the top of the cabin to the floorboard, and the windshield also is inserted in grooves cut in both the top and floorboard.

Grooves in top and floorboards can be cut with a saw. At this time, make sure both sides are identical: grooves are the same. all layout lines match and the sides themselves are the same’size and shape.

Layout and cut the two circular openings in the cabin sides. Do the same for the round portholes’ in the cabin back.

You will need some help with this part of the operation.

Lay one cabin side on the floor, then glue and attach with two or three ‘finishing’ nails, the cabin top, and helicopter floorboard.

Insert the windshield in the grooves in top and floorboard slide it down to fit into the groove in the cabin side.

The windshield should be measured and cut to fit

The protective paper should be left on until the copter is assembled and painted.

Before or after the glue sets, drive No 6 x 1-1/4 in flathead wood screws through the cabin sides into the various pieces between them. Space them about 6 in. and countersink them, then cover with wood putty.

Glue and screw the mounting blocks for the dashboard (instrument panel) to the inner surfaces of the cabin sides as shown on the drawing;

Helicopter readily disassembles for storage or transport using a screwdriver and an adjustable wrench. The cockpit is the major unit.

Rip a 1 in. strip from the 8 ft. 2 x4 and cut to length the top and bottom as well as the front piece of the tail framing.

Use glue and finishing nails for this assembly. It will be quite strong for its size and weight.

If the chopper will be used outside, use waterproof glue and rustproof fasteners.

These require 2 ft. of 4 in. cardboard carpet tube or something similar, plus margarine plastic tubs.

Because they do vary in size and shape, get tubs that will fit over the ends of the cardboard tubes.

If the chopper will be outside finish the tubes both inside and with exterior paint or primer. Cut the engine supports to size and a half-round groove in to conform to the shape of the engine tube.

Glue the support blocks to

Length of  1 x 1 in. stock is glued to cardboard motor tube; this bracket is glued and screwed to the underside of support.

Top of tail assembly is horizontal, unit screws to back of the cabin and is further braced by engine support on cabin top.

Fins for the rotor are cut from 1/8 in. hardboard pr rigid plastic. Make a pattern for the fins by enlarging ‘(he squared drawing. The rotor hub is shaped from 3/4 in. plywood, with slots, cut around the edges at 20 degrees as shown on the drawing. Space the slots

90 degrees apart. A handsaw probably is the easiest tool to use for this operation. Cut the slots just wide enough to accept the fins. Be sure to drill the center hole perpendicular to the face of the hub. A length of brass or plastic tubing is epoxied in the hole to provide a bushing that minimizes wear by the rotor shaft.

Place the hub on a flat surface over waxed paper or plastic wrap, then glue the fins into the slots, with the fins flat and flush with the back surface of the hub. Wipe off any excess glue and put the rotor aside until it is painted.

Make five 45 degree cuts through a 60 in. length of straight-grained 2 x 4 to create the four landing gear struts. Dado and drill them as indicated. To produce the curved notch that matches the curve of the plastic pipe used for the “pods” a 1-7/8 in. hole saw was positioned to cut off the lower corners of the struts.

Make sure all struts are shaped the same so the copter will sit level.

Landing gear struts are 2 x 4s, “pods” are assembled from plastic pipe and fittings. Steps on each side are 1/2 in. plywood.

Cut the two steps to size and shape and glue the struts to them. Again, make sure both strut/step assemblies are identical. Test mount the struts to the cabin, locating them on the horizontal and vertical lines previously drawn on the cabin sides.

Pods now are cut and assembled from 1-1/2 in, plastic pipe and fittings.

There is a 5 in. and 48 in. length of pipe for each pod joined by 45-degree elbows sealed at each end by caps.

Assemble the pipes and fittings with solvent cement as for a real plumbing application.

Drill two 1/4 in. holes through each pod as indicated, at 45 degrees to the horizontal axis of each pod.

Redrill the outside to 1/2 in. so you can reach through with a screwdriver and turn the No. 14 x 2 in. wood screws into struts. Drill pilot holes in the struts so the screws enter easily without splitting the wood.

The main rotor is cut from 1/2 inc plywood or solid stock. Radius the tips and break all edges with sandpaper. The hub for this rotor is two 1/2 x 6 in. discs. The portholes cut from the back of the cabin will do nicely.

Glue and nail till rotor discs to the center of the rotor. Then drill a center hole through the assembly. Counterbore the hole outside of the assembly only, about 3/8 in. deep.

Cut a 5 in. length of the plastic pipe for the rotor support then set the rotor aside for painting.

Outfitting tho cabin can be fun, and you can install any number of junk gauges, meters, switches, or whatever to intrigue the young pilots. I have indicated one possible instrument layout with identical instruments for both pilots. Airliner type controls are more convenient for children to use and are installed rather than the stick that normally is used in helicopters.

Cut the control wheels from 3/4 in. plywood, round all edges, and sand them smooth. Drill a 1/4 in. the center hole in each wheel then counterbores the back about 3/8 in. deep.

Control columns (yokes) are 6 in. lengths of the plastic pipe. Assemble the controls as detailed. If you have trouble finding the fender washers, substitute l-9/16 in. wooden discs center drilled 1/4 in.

Run a nut down on the top of the assembly and tighten until the column is held firmly on the dash. Attach the control wheel with counterbore down, fit on a 2 in. washer, then a self-locking nut. Tension, or drag, on the wheel, is adjusted by how tight you turn on the self-locking nut. Disassemble the control columns for painting.

Drill holes for the various devices to be fitted in the dash, attach them, then remove them for the final painting.

Cut the seat board slightly shorter than the 29-1/2 in. width of the cabin. Attach two 2 in. to the top back edge of the seat about 18 in. apart, which will allow the pilots to store their flight gear under the seat.

Position the seat in the cabin and mark the location for the hinge screw lines on the back of the cabin. Drill pilot holes.

Two place cockpit has dual instrumentation and controls, with dummy microphone and coiled wire located in the center of the panel.

The single bench seat is 2 in. foam rubber slab over plywood that is hinged to provide storage beneath.

The twin backs cushions are made in a similar manner.

With all subassemblies complete. sand all the pieces, fill any defects with wood putty, then happy a sealer to all surfaces. If the chopper will be used outdoors, use an exterior primer and paint. Bright colors not only please the children but are typical of aircraft. For pin-striping use colored plastic tapes. Protect the windshield from paint splatter with masking tape and newspaper before painting. Remove once painting os completed.

Mount the landing gear to the ‘copter body with machine screws, using 1/4 x 2 in, screws in the top ho

Use washers on all screws.

Reattach the tail assembling, using three 1/4 x 1 in. screws and washers through the engine., support and tail frame extensions. Install the tail rotor with a 1/4 x 3 in.  carriage bolt and two washers applying a bit of WD40 on the bolt.

Install the seat by installing the seats to the cabin back. Mount the back cushions centered in the porthole and few inches above the seat. Drive two No. 6 wood screws through the cabin back into each seatback.

Use a self-locking nut and tightening so there is a slight drag on the rotor.

“Reinstall the control wheels and mount all gauges, switches, etc. in the dash”.

Glue’and screw the dashboard to the mounting blocks previously attached to the cabin sides.

Mount the main rotor, using the same method as for attaching the control wheels, Lubricate the bearing surface. then tighten the self-locking nut to pry. duce some drag. While the tail rotor is small enough so it is not likely to cause problems when it spins freely, the main rotor is a different story.

A child on one side could spin the rotor and with another child on the other side. If your children or their friends are quite active, it might be safer to align the main rotor with the centerline of the ‘copter and tighten the nut so it will not turn.

It might be fun to use a small battery-powered motor to turn the tail rotor slowly. The pilots could glance through the portholes to make sure the turbine engines are running.

I hope you had fun with this toy helicopter plan which has stood the test of time created in the early 1980s. Another project can be found HERE How To Install Cubed Shelving

Scroll back to top